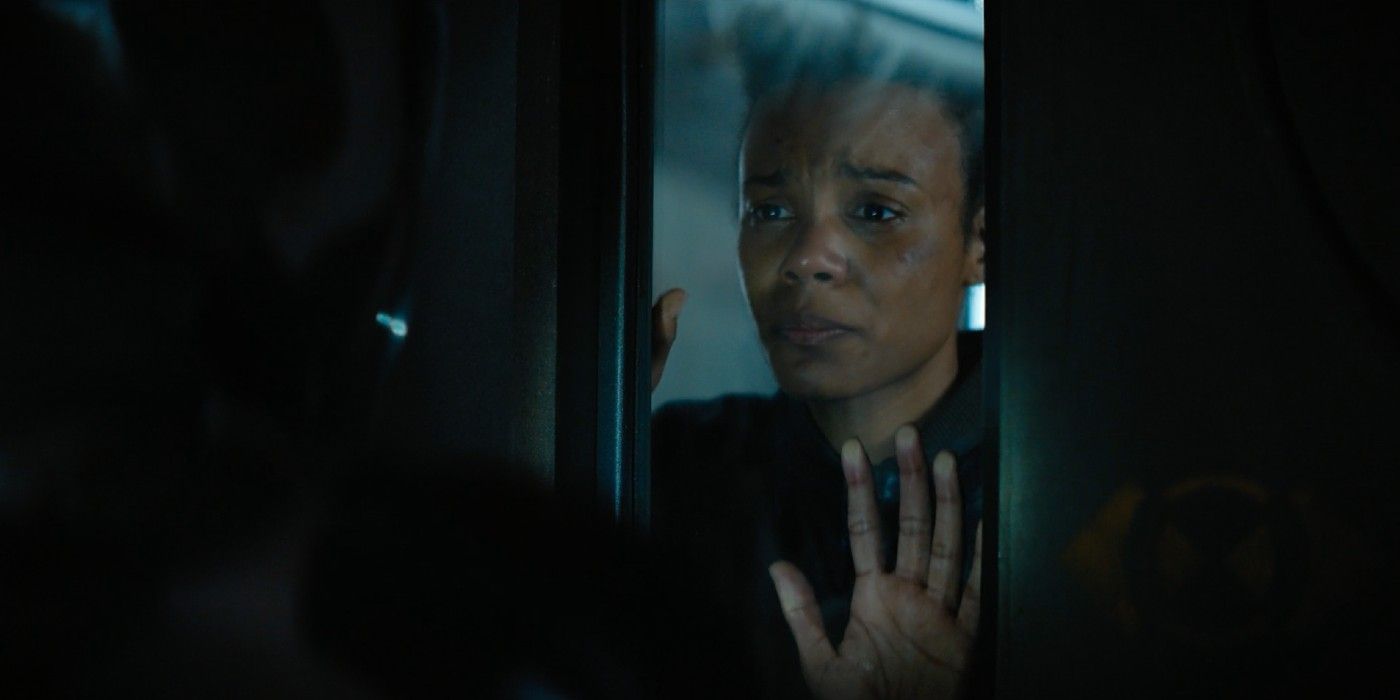 Our loyal voiceover companion Gaal begins the penultimate episode of the first season of Foundation by arguing that history itself is mankind’s greatest invention. “The story is not a fact, it’s a story,” she adds, while stressing that this story can be carefully organized and shaped. It all depends on who is telling the story.

We then see a teenage Salvor asking her father where people are from. Because it’s an easy question, with an easy answer. Ironically, Abbas mentions as a theory the notion that, in the past, humans only existed on one planet – with Earth being mentioned as a possible beginning. The conversation deepens as teenage Salvor wonders how people can hate each other if they are all from the same place.

There is no simple answer to this, of course. But Abbas tries to explain that people aren’t just brains, they’re feelings, and those feelings aren’t always the best advisers. Then he drops one of my favorite Asimov quotes of all time, like nothing. “Violence is the last refuge of the incompetent”, before the conversation turns to the fact that all that has come before is only proof that the fall of the Empire is indeed to come.

Returning to the present Salvor, she wakes up, incredibly disoriented. It takes a moment for her to find her bearings, but when she does, she realizes that the ship has jumped… back to Terminus, and that it was all because of Lewis. She tries to call home, but no one answers – and there doesn’t seem to be a way out.

We then move on to Brother Dawn and Azura, as she tries to explain to him what he saw, what he missed while he got around inside the palace. They make plans for an escape that seems doomed before it has even started and say goodbye with a kiss. Brother Dawn goes to meet Brother Dusk and tries to find excuses for being late, but Brother Dusk seems more interested in teaching him a lesson than anything else. Or threatening, it’s hard to say. Either way, everything is very disturbing.

The lesson which is truly a test is discovered by Brother Dawn as he uses the gadget Azura gave him, which allows him to see the color. Once he can, he realizes that Brother Dusk knows he beat him on the hunt – and that he couldn’t really see the mural, which means he has to run. Not that Brother Dusk is going to give him time to do it.

He tries though. He’s really trying to follow Azura’s instructions. It’s not going very well, but at least he’s alive for now. The problem, of course, is that he has a very recognizable face. He goes to what looks like a refugee camp and is quick to exchange his Imperial aura for a jacket, so at least he’s got that for himself.

Salvor, meanwhile, tries to get out of the Invictus and get home. She’s fully dressed in an astronaut suit, let’s jump off that ship and climb onto mine – or Hugo’s – and surprisingly enough, it works. But she also can’t reach anyone on Terminus from there. However, just when she’s about to lose hope, Hugo returns and we’re about as happy to see him as Salvor, and she’s pretty happy.

Everything that happens on Terminus has to do with zero field, Salvor says. And she has to stop it. “What if there was no solution to this crisis? Hugo asks him, but Salvor doesn’t give up. She has to see him to the end. Meanwhile, she wants the rest of the Hugo Thespins to make contact to help her deactivate the Invictus readers. She can’t explain now, she just has a feeling.

Brother Dawn, on the other hand, experiences life. He seems in awe of everything he encounters. He apparently remembers Azura’s instructions enough to drive to her house, where she kisses him enthusiastically. He has predictable depression, and she comforts him before trying to kill him, as you would. He tries to run away, but he doesn’t go too far. Then there is another Cleon standing above him, who looks like him.

Hugo and the Thespins are on the Invictus, but once they get to the bridge, Phara is no longer tied. Hugo knows enough to understand how much of a problem this is.

Salvor lands on Terminus as Gaal’s voiceover once again reflects on the story and its unreliability at times. Surprisingly, Gaal also takes this moment to confirm that this is her story and that she decides what is said and what is not, as Salvor goes to town and finds that the The expansion of the zero field has apparently swept everyone away.

This, as you might expect, drives Salvor mad, although being mad at the safe doesn’t really seem like a productive way to do business. Once she gets closer, she finds her mother and the same artifact that houses Hari Seldon’s prediction. The answers don’t come right away, but when Salvor concentrates, she finds herself in Gaal’s place again, in front of Hari, the very first fateful night they met, and then in his prison cell.

“History is the ultimate weapon, for it harnesses time itself,” says Gaal, as Salvor discovers how to unleash the first beaming. Once she does, the safe finally opens and everyone she thought was dead returns. Salvor finds his mother and together they notice that the safe leads to a door.

Back with Hugo, the problems are brewing, because they could not find Phara. The reason they didn’t do it becomes obvious very quickly. She took over another of Thespis’ ships.

We come back to Brother Dawn, the one we know and the one about to take his place. Except the Empire didn’t get it, and that Cleon isn’t … taking its place as Brother Dusk probably would. It’s all part of a revolutionary plan of which Azura is a part. And this new Cleon is going to take Brother Dawn’s place, and one day bring down the Empire from within. That’s the plan from the start. That’s the reason Brother Dawn was different in the first place.

“You had no choice in all of this,” Azura told him. “But thank you, all the same.”

It would have been a very interesting idea, except for the Empire soldiers to come in and kill everyone, including the new Brother Dawn. Afterward, as Elder Dusk and Elder Dawn discuss the one unforgivable thing – his differences – Elder Dusk seems anything but inclined to forgive and forget what Elder Dawn cannot help. But it’s not his; it’s Brother Day.

On Terminus, everyone converges around the safe. The Anacreons soldiers are there, but as they attempt to engage with Salvor, the Thespin ships finally land – and they have more firepower. At least until Phara lands, on the ship she took over.

Salvor has a plan, however, once she tries to sell to Phara. The Invictus is too powerful to destroy it, she said. Instead, they should use it as leverage and unite, all of them, against the Empire. Phara doesn’t seem to want to listen to reason, but even Rowan is on Salvor’s side. “The hunt is over, Phara,” he said. This would be a nice way to end the episode, except that Phara has to clear his frustrations from the vault, which leads Salvor to ultimately kill Phara with one of his own arrows.

Proving he is the best boyfriend ever, Hugo literally stands between Salvor and a gun, but something bigger happens. From the trunk comes out… Hari Seldon? “Well, that’s encouraging,” he said. Anacreons, Thespins and Termini. Seeing you all gathered here gives me hope that we can truly succeed.

To see everyone unite against the Empire, nine episodes of Foundation are available on Apple TV +.

KEEP READING: The Foundation’s Adaptation Tells a Story of People, Not Empires

Lissete, although everyone calls her Lizzie, was once a serious lawyer. Now she’s decided to stop being serious, even though technically she’s still a lawyer. She’s also the junior TV features editor at CBR, and her words can also be found on Fangirlish, GameRant, LatinaMedia, and Remezcla, among others. You can follow Lizzie on Twitter @lizziethat where she constantly talks about the intersection between entertainment and culture. Oh, yeah, and gushing out of her favorite things.