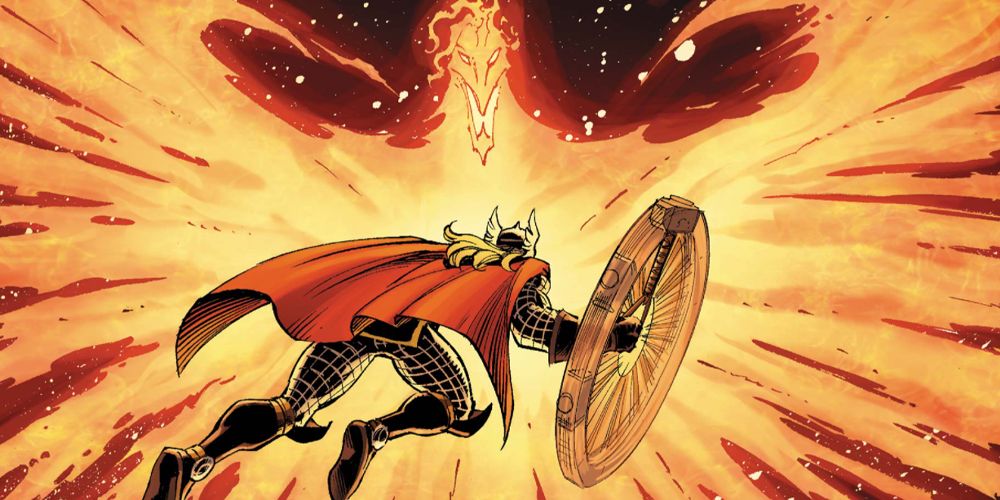 WARNING: The following contains spoilers for Avengers # 51, on sale now from Marvel Comics.

No family is perfect, and many parents keep secrets from their children for as long as they can in an attempt to protect them from harsh truths that could change their perception of themselves or those close to them. Sadly, children will inevitably uncover these secrets one day, and knowing that their parents actively withheld this information from them usually worsens the moment when the truth finally comes out. Situations like these can tear entire families apart in the real world, but in the Marvel Universe, they can threaten the safety of the world itself.

Ever since learning that his father Odin has kept his biological mother’s true identity from him all his life, Thor has been sent on a downward psychological spiral that threatens to tear the Avengers apart. In an attempt to cheer up his longtime friend by Avengers # 51 (by Jason Aaron, Juan Frigeri, David Curiel, Cory Petit from VC and Carlos Lao), Iron Man recounts his own experiences uncovering the dark secret his parents kept from him while he was growing up, and the similarities between their situations prove that no hero comes from a perfect home.

Throughout his childhood, Thor believed that Odin’s wife, Freyja, was his mother, and he loved her as such until adulthood. However, during a cataclysmic battle against the Celestials in Thor # 300 (by Mark Gurenhold, Ralph Macchio, Keith Pollard, Gene Day, Carl Gafford and Joe Rosen), Thor “discovered” that his real mother was Gaea, the divine embodiment of Earth. This revelation sent Thor into a deeply traumatic identity crisis, but he ultimately accepted it and forgave Odin and Freyja’s deception. Sadly, Thor’s trust in Odin was again shattered in Avengers # 42 (by Aaron, Luca Maresca, Curiel and Petit) when the Cosmic Phoenix was revealed to be his mother through his first human host, Firehair, a member of the Avengers 1,000,000 BC, rejecting his supposed relationship with Gaea like another of Odin’s lies.

The revelation that his father had lied to him yet again and that his real mother is a being who slaughtered entire planets sends Thor into a deep depression that prompts him to sever his ties with the Avengers and banish Echo, the last host of the Phoenix, to set foot in Asgard. Seeing how much Thor is in pain, Iron Man visits him and admits that he knows what it’s like to find out something about your family that makes you wonder who you are. Growing up, Iron Man believed he was the son of Howard and Maria Stark, but later learned that he was adopted and that his real parents were Jude and Amanda Armstrong, agents of Hydra and SHEILD, respectively. Although Iron Man was able to find Amanda and make peace with her by International Iron Man # 5 (by Brian Michael Bendis, Alex Maleev, Paul Mounts, Clayton Cowles), he still struggles to come to terms with the fact that he’s unrelated to the people who raised him.

RELATED: The New Dark Phoenix Took A Horrible Twist on His Relationship With Thor

Before they are cut off by an invasion of the Multiversal Masters of Evil, Iron Man notices that he has never met any heroes from happy families, and the simple fact is that there aren’t many who do. The childhoods of many Avengers have been defined by violence, murder and conspiracy, from the education of Hawkeye and Hulk under abusive fathers to the traumatic training of Black Widow as part of the Red Room program, and these experiences have fashioned the heroes that each of them grew to be more than any of them would like to admit. Although Iron Man and Thor came from more privileged backgrounds than their teammates, both struggled to form an emotional bond with their fathers. In turn, Howard and Odin both kept secrets from their sons that would one day wreak havoc in their lives.

Despite his best intentions, Odin’s decision to hide his relationship with the Phoenix brought Asgard and his relationship with Thor to the brink of ruin. With a new incarnation of the Dark Phoenix ruling out Asgard, Thor’s inability to work with Echo could destroy everything Odin has built, and there may soon be no one alive that Odin can blame except himself.

Spider-Man: What Happened To Marvel’s Other Lizard?

Drew Kopp is a comic book writer for CBR who holds a Bachelor of Fine Arts in Creative Writing. As a die-hard fan of comics, fantasy / sci-fi, and video games, he loves nothing more than injecting his love of storytelling into his writing, and he loves nothing more than to write about anything out of date. When he’s not busy obsessively theorizing about comic book storylines or drooling over the next big indie game, he can be found writing about these topics.