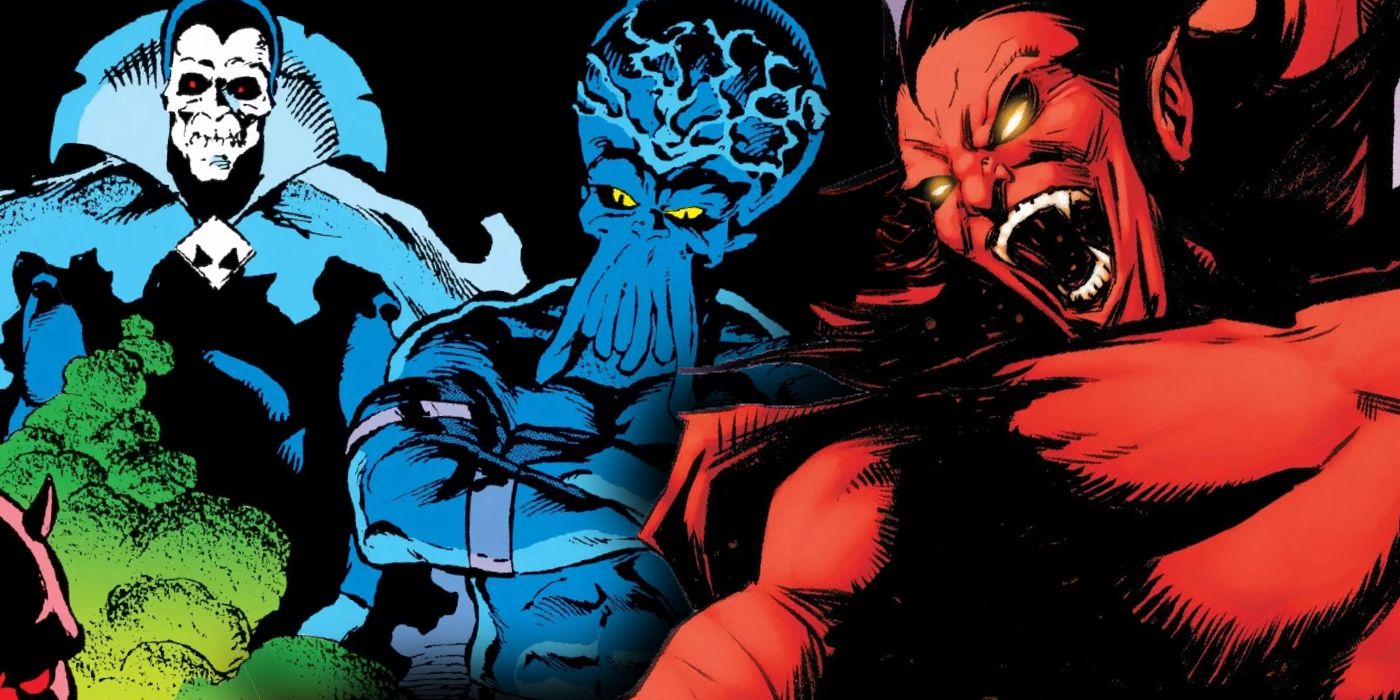 WARNING: The following contains spoilers for Shang-Chi and the Legend of the Ten Rings, now in theaters.

Shang-Chi and the legend of the ten rings introduced a whole new hero to the MCU as well as a whole new kind of horror in the form of Dweller-in-Darkness. While the Dweller of the Marvel Cinematic Universe certainly left an impression, its comic book origins are much more terrifying.

The Dweller-in-Darkness is actually just one of the pantheon of dark gods in the Marvel Universe known as the Fear Lords, and all of them have already proven to be even more powerful than the underworld devil, Mephisto.

First introduced in the 1974s Thor # 229 (by Gerry Conway and Rich Buckler) as “He Who Dwells Below,” the Dweller-In-Darkness of the comics is more of an Eldritch horror than his MCU interpretation. Like the rest of the Fear Lords, the Dweller’s origins are largely a mystery, though he has previously described himself as a cousin of Nightmare.

After feeding off the fears of humanity for thousands of years, the Dweller-In-Darkness and his Shade-Thralls came into conflict with Doctor Strange after facing off against the God of Thunder. Fortunately, when the inhabitant gathered the other fear lords together to destroy humanity entirely, he was turned on by one of his own and his plans fell apart.

Fear Lord D’Spayre was responsible for the slaughter of Dweller-In-Darkness, an act that was not unusual for this vicious villain. Created by the inhabitant, D’Spayre first appeared in the 1978s Marvel Team # 68 by Chris Claremont and John Byrne, in which the Lord of Fear defeated Man-Thing but proved unable to sow lasting fear in Spider-Man’s heart.

The years since have seen D’Spayre battle his fellow Fear Lords as well as the Unstoppable Juggernaut, and the villain has once stood by Magik’s side against the mystical and self-aware computer known as the name of Archenemy.

Kkallakku is one of the strangest fear lords out there, which in their case speaks volumes. When Kkallakku makes his first appearance in the pages of 1988 Marvel Comics presents # 1 in Al Milgrom’s “Fear Itself”, he used his parasitic spawn to send the Silver Surfer into a deeply depressing hallucination in order to feed off the fear of the cosmic hero.

During the Dweller-In-Darkness attempt to induce “Great Fear,” Kkallakku’s fear-eater offspring are unwittingly dragged into an unknown dimension by Doctor Strange, forcing the demon to retreat.

Before the towering Lurking Unknown was finally imprisoned during the Fear Lords’ failed attempt to take over Earth, this monstrosity was shockingly summoned by Odin himself.

Years 1967 Thor # 136 saw Odin summon the Hidden Stranger to test Jane Foster’s courage that he had temporarily imbued with Asgardian powers. When Thor asked his father for permission to marry his deadly love, the Hidden Stranger became the barometer of whether she was worthy of Asgard, and neither Jane nor Thor could stand against him alone.

Introduced in the years 1991 Doctor Strange, Sorcerer Supreme N ° 31 in “Le livre des Vishanti: A Gathering of Fear Part One” (by Roy Thomas, Jean-Marc Lofficier and Larry Alexander), the formidable Nox has long been considered the Olympian goddess of the night known as Nyx.

From meddling in the affairs of the Olympians thousands of years ago to the influence of the actions of villains such as Psycho-Man, Nox has always been as dangerous from the shadows as they are up close.

Nightmare is arguably the most recognizable fear lord of all, and for good reason. Its introduction in Doctor Strange Master of Black Magic! “(By Stan Lee and Steve Ditko) in the years 1963 Strange tales # 110 saw Nightmare almost trapping Doctor Strange in his astral form.

Since then, Nightmare has found a place at the Dweller’s table alongside the other Fear Lords, although this is perhaps one of his less memorable plots. Nightmare played an active role in Secret invasion, Civil war, and recently appeared in Savage avengers # 22 (by Gerry Duggan and Patrick Zircher) to push Conan in the right direction in his fight against the evil wizard Kulan Gath.

One of the scariest fear lords, the Strawman is also the most benevolent of the bunch. His first appearance as “The Scarecrow” in the 1975s Death of the night # 11 (by Scott Edelman and Rico Rival) was a bloody affair in which the Straw Man came to life from a painting to murder thieves and cultists.

Despite his grisly tactics, the Strawman has always been a protector of humanity, even going so far as to single-handedly defeat the demon Kalumai before warning Doctor Strange of the conspiracy of his fellow Fear Lords. This betrayal cost the Strawman his life, but with his original painting in the possession of Doctor Strange, this good-humored fear lord need not fear his death will be permanent.