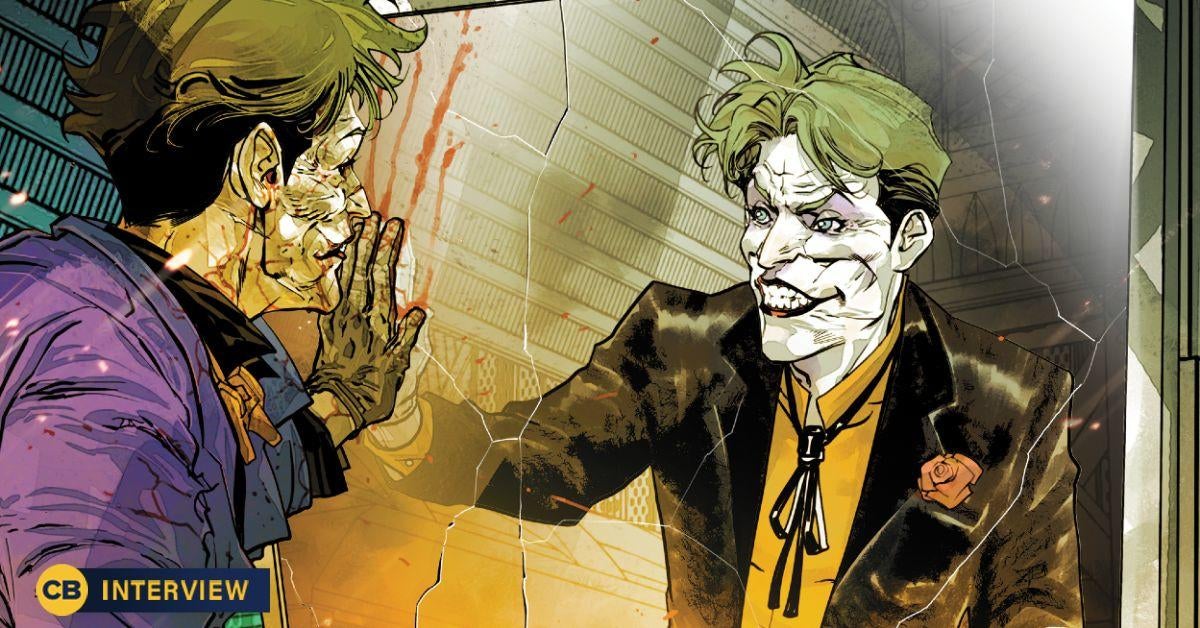 Matthew Rosenberg has seen his DC output increase over the past few years and will be adding even more titles to his resume this fall. In addition to writing a new WildC.ATs comic book series, Rosenberg will write the final volume of The Joker. James Tynion IV and Guillem March were the last collaborators on The Jokerwith Jim Gordon and other dangerous individuals in pursuit of the Clown Prince of Crime. The Joker: The Man Who Stopped Laughing by Matthew Rosenberg and Carmine Di Giandomenico will take over while establishing a new status quo for the series, as another mysterious figure hunts down Batman’s greatest enemy.

ComicBook.com had the opportunity to chat with Matthew Rosenberg about his plans for The Joker. The writer talked about continuing Joker’s terrorist escapades, taking the villain on a cross-country road trip through the DC Universe, surprise guest appearances, working with Carmine Di Giandomenico, And much more. You can also take a look at the art preview to The Joker: The Man Who Stopped Laughing. The first issue is slated for release on October 4.

Launch of a new volume of The Joker

ComicBook.com: How do you approach a series like The Jokerwhere you’re going to relaunch it with a new number one, while taking over from James Tynion?

Matthew Rosenberg: It’s always difficult to approach a book like this, because The Joker obviously has an incredible history and over 80 years of stories to pull from. So you want to do something fresh and different, but you also want to make sure you’re sticking to everything that’s come before. For this book, it is particularly tricky because James and Guillem [March] and this team made such an amazing book, and it’s so recent, so it took me a long time to figure out exactly how we wanted to handle the recovery from there.

I think the idea is that we sort of treat it as a continuation of what they were doing, but also as a whole new beginning. So if you haven’t read it before you should but if you haven’t read their book we have a new protagonist in the series we have a new direction but story wise The Joker picks up a few weeks or maybe a month after the end of this series. And so we want to make sure that the fans of what they’ve done, which I’m a huge fan of what they’ve done, we want to make sure that those fans know what they’re getting and understand it and it seems natural, but also at the end of what we’re doing, it should feel like a whole different book and a whole different experience if we’ve done our job right. So it’s a tricky balancing act, but I feel like we got it right in the early issues. I feel like no one is going to be lost, and everyone is going to realize that we’re going somewhere different with this.

For readers who may not be up to date, what is the status quo of The Joker when readers pick up the first issue?

The Joker was on the run after being hunted by many very dangerous people and Jim Gordon, who worked for some of these people and also worked for himself. And at the end of their series, he disappeared. He had left Gotham and was gone. When we pick up, it’s the Joker’s return to Gotham. He’s back, he’s had some time away from the city to reflect and see what he wants to do, and he has big plans.

He wants to regain the status he had of being the most dangerous villain in Gotham, or possibly the world. And so he sets the plan in motion and comes up against some problems and some resistance, especially in Gotham, where when you leave, they don’t hold your place. People are going to take over, and he meets some of his former colleagues in the form of Two-Face and Black Mask, and people like that, and they’re not exactly welcoming when he comes back. So that’s where we come in, is that the Joker is ready to go back to being the classic Joker again, and find that there might not quite be a place for him.

The Journey Through Joker Country

What went behind the decision to put Joker on a cross-country road trip across the United States?

It’s a few things. It’s hard to tell a Joker story in Gotham that doesn’t become primarily a Batman story, and we didn’t want to do that. It’s the Joker book and it’s Joker trying to reclaim his glory, and it’s tough when you have Batmans and Robins and Nightwings and all those people who will get in his way. As he arrives in Gotham and tries to regain his glory, he soon realizes that it won’t work and he needs to expand and change what he does and change locations. So it’s Joker in motion, but there’s also a lot of Gotham stuff in there. I have to be a little vague about it here, but it will start to make sense. The city is a big part of Joker lore, and so we want to make sure there are ties to it, but we also want to see it expand to new places it’s never been.

Along with seeing some of the Batman characters on the show, the road trip aspect of this one provides a unique opportunity to take Joker to different locations in the DC Universe. Are there any chances of seeing non-Batman characters appear in the series?

Of course, yeah. That’s part of the fun of what we’re trying to do is make sure the Joker has a chance to prove who he is by putting him in places he’s never been. That’s really the idea. And so there are a few beginnings, a few non-regular Batman characters that are going to make appearances, and as it goes, it’s going to be a book that takes you places you’ve never been in the DC Universe. But also, there are sure to be some familiar faces he encounters.

I saw in the original announcement that there would be backup stories, with the first Joker pairing with Mirror Master. Will these continue as the series goes on?

Yeah. First of all, we have Francesco Francavilla drawing them, so they’re beautiful and amazing, and yes, the save stories are unusual. It’s not like a traditional backup story where it’s exactly a separate idea. What they are over the course of the story will kind of change and evolve, but they’re very strange back-up stories, that’s what I can say. They’re funny and weird, and they feel very different from what we do. They’re a lot more comical and a lot wackier, but there’s a reason for that, and it’ll become clear as the story goes that they’re not exactly different Joker stories. That’s all I can really say. But they’re important to who the Joker is, who our Joker is in this book. They are very important to unlock this in a mysterious way.

And of course, without giving away any spoilers, there seems to be a bigger mystery with Joker by the time readers come to the end of the first issue. What can fans expect from this development that pops up?

Yes, there’s a big mystery that drives the whole book, and it has a lot to do with our character chasing the Joker and what he wants. And basically the idea is that we’re trying to challenge what you know about the Joker and what you think you know about him. I always feel like Joker works best when you have more questions about him than answers, and so we try to really raise as many questions and keep you unsure of what you know as we go. And it will continue. It’s sort of a theme of the book, who the Joker really is, that’s what we’re trying to get across to people, and we’re going to make it very difficult for them.

How was the collaboration process with Carmine Di Giandomenico? Is this your first time working with him?

No, I had the chance to work with Carmine on my first thing in DC a short time ago. We did two numbers together Future state: rogue, which sort of started my WildCATS journey. Carmine is amazing, he’s always an artist who I think really pushes me to do my best and lay out my best pages, and then he constantly comes in and upgrades everything and makes it better. And then you want to work harder, and it feels like an endless arms race to see who can make the book better. I always find things where I’m like, “This is a brilliant panel,” and it’ll do really well, and then it comes back and it’s even better.

I love working with Carmine. He’s such a smart storyteller, and he’s so good at building the world down to the smallest detail. So I really feel like people are going to fall in love with his Joker and the way his Joker interacts with everything. You get a real sense of its place in Gotham and its place in the larger world. And so everything I do is kind of in the service of trying to give him enough space to really do big and crazy and scary and weird and fun things, and he does it as well as anybody.

What the future holds

What can readers expect The Joker keep on going?

I think it’s one of the craziest things I’ve ever written. It’s one of the most fun and exciting things I’ve ever worked on. I hope people give it a chance and see that we’re trying to make sure that we’re honoring the Joker’s legacy and really doing things that make you question everything about the Joker at the same time, and that’s is a truly dangerous balance. It’s a really tough tightrope to walk, and we want the readers with us to feel that kind of tension, that anything can go wrong and everything you know can go wrong.

So hopefully when the first issue comes out people will really dive in and give us their trust because we have a really crazy plan for all of this that I don’t think anyone will see coming. And other than that, I would say people should, when the book comes out, there will be spoilers on things, or maybe they’re not spoilers, but just be careful. You should read it before going online, that would be my advice.