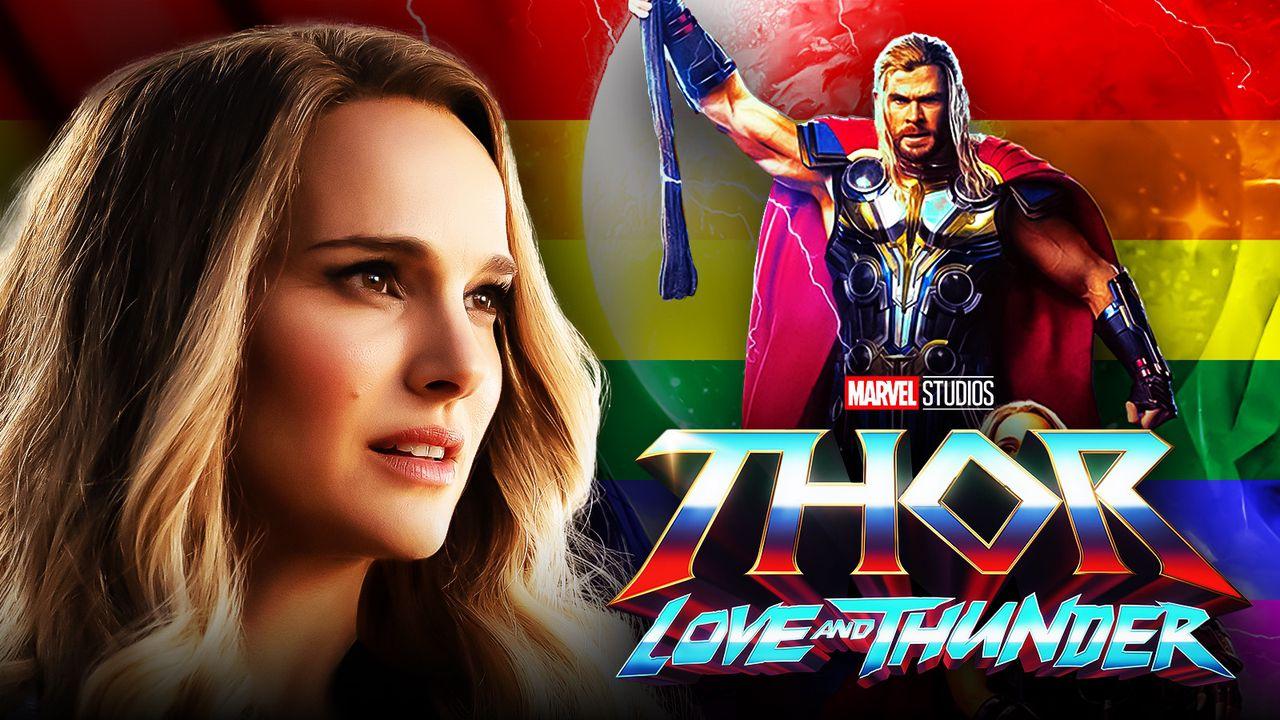 Thor is back in Marvel Studios’ latest feature film Thor: Love and Thunder. The film sees Chris Hemsworth’s God of Thunder reunited with ex-girlfriend Dr. Jane Foster, who has managed to gain control of Thor’s ancient hammer, Mjölnir. Thor, Jane and their friends Valkyrie and Korg must team up to stop being known as Gorr the Butcher God (Christian Bale), who is determined to rid the universe of its gods.

Marvel Studios has been pushing for greater diversity and inclusion for the MCU for the past few years, and it has worked. The black-led movie Black Panther became a global phenomenon that resonated with audiences and made them feel seen. Likewise, Marvel’s first solo movie with a female lead, 2019 Captain Marvel, earned over $1 billion at the box office and gave young girls everywhere a new hero to look up to.

During this time, however, the Marvel Cinematic Universe lacked LGBTQ+ representation. They’ve taken baby steps, through characters like Phastos and America Chavez, but the studio still has a long way to go.

Fortunately, Thor: Love and Thunder can give fans a reason to be excited about the future.

Speaking to Andrew Freund, Thor: Love and Thunder Jane Foster star and actress Natalie Portman had the following exchange, where she acknowledged the film was “the most gay movie ever made in the MCU.”:

Freund: “Natalie, is it safe to say this is the most gay movie ever made in the MCU?”

Freund: “I mean… you’re flying on rainbows over there… or am I imagining it?”

Portman: “I mean, that’s the heart of the comics. I feel like that’s where it all started. It’s very faithful to the source material, I think.

Portman also spoke about the importance of children now dressing up as his character:

“It’s amazing. It’s such a privilege to be in this world. And it’s so wonderful too…to be in a time where there are so many female superheroes that I think girls don’t don’t have to be like, “Oh, there’s a girl and that’s who I am. There’s so many that they can pick and identify based on their personality, or their superpowers, or even of their weaknesses which, like they can figure out who they match as a human being and not just feel like they have to find their demographic like, you know, alignment.

Additionally, Freund posed the question: If Jane Foster’s Thor were to have its own book club, what kind of literature would it feature? The actress replied:

“Perhaps some like love poetry. Like some Neruda. I actually spied on Chris [Hemsworth] I read about it on set one day and I was like, “Oh, I feel like that’s very much in our…” She’s very romantic, I think. She’s a romantic, that’s for sure.

Portman also revealed what she would do if she actually received Thor’s power: “I’ll get rid of all…people waging wars.

She also noticed the plastic version of herself, the action figure that looks like her (likely referring to her Marvel Legends figure from Hasbro)

“I haven’t received it yet, but my daughter went out and bought it one day when she was with her nanny and took it home and I was like, ‘Oh my God, this is so…’ It was so meaningful to me. She was so excited but she was like, ‘It’s you, mum! It’s you!’… She even wanted to look at it and she was like, ‘ They put your birthmark on it.’ And I was like, ‘Aw, you noticed.'”

And finally, the Thor 4 star explained how “powerful” it was seeing yourself in your full Thor costume for the movie:

“It’s amazing. I mean, it’s also like it’s a simultaneous feeling of being very powerful and also, ‘Look how stupid and fun my work is!’ Like I’m at work with a cape, like, that’s great…and a wig.

Natalie Portman hasn’t appeared in an MCU project as Jane since 2013 Thor: The Dark World. She appeared briefly in Aavengers: endgamebut this was accomplished through the use of stock footage from Thor: The dark world and all Portman had to do was record new dialogue snippets.

So it’s quite significant that Portman is reprising his role in love and thunder after so long. Since it’s been so long since Jane had a major role, it was hinted that flashbacks would fill in the gaps in her story, showing how she and Thor initially parted ways.

As for LGBTQ+ elements in Thor 4It’s already been noted that Tessa Thompson’s Valkyrie is bisexual, which is another step in the right direction, but unfortunately Thompson herself said there wasn’t much time in the film to explore the Valkyrie love life.