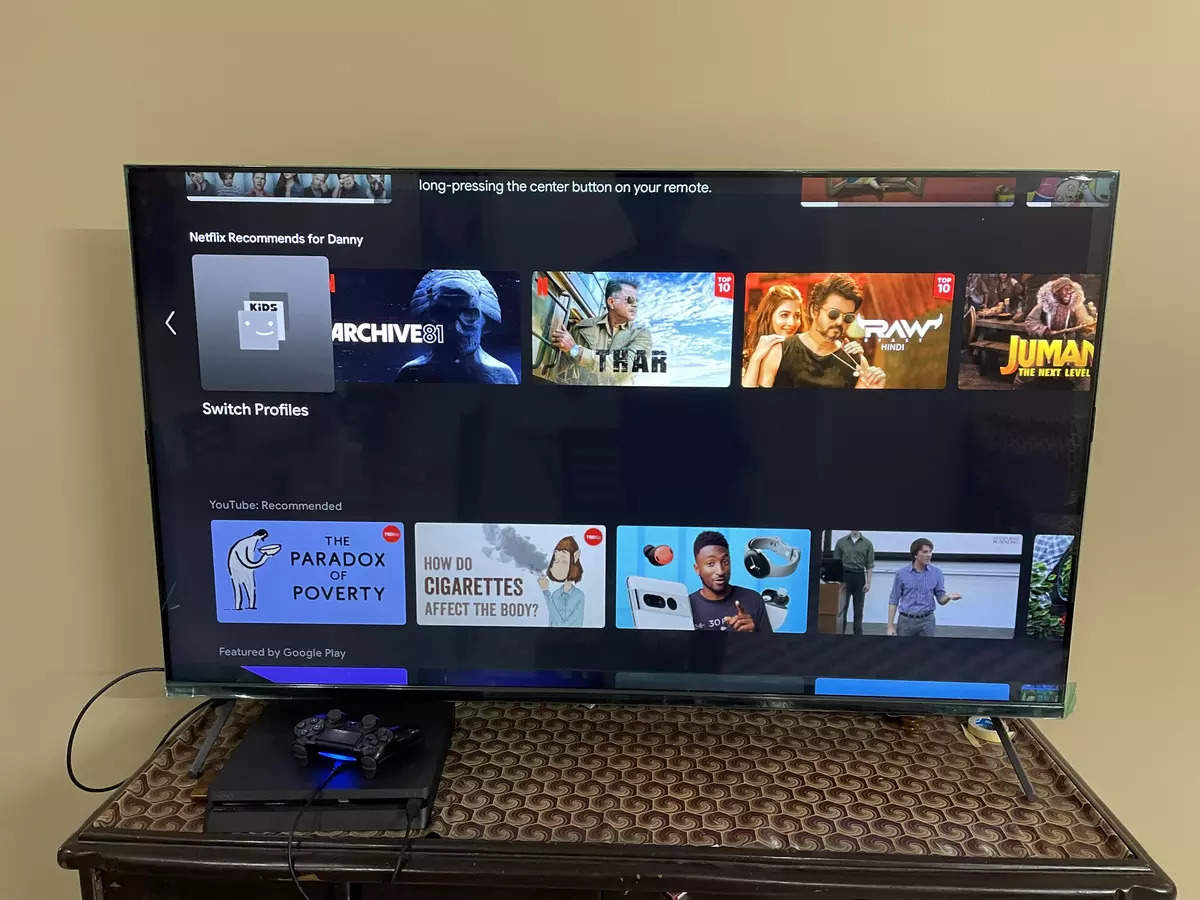 The smart TV market is no longer lacking in options. We now have televisions available in different sizes, prices and of course by different brands offering a host of features. While we’ve seen the segment taken over by affordable TVs when it comes to more masses, brands like Samsung, Sony and LG are leading the charge at the other end of the spectrum. Philips, with its new range of smart TVs, tries to be an alternative to these obvious choices. But does he? I spent a month using the Philips 8100 series TV and here is my full review.

The aesthetically leaves a lot to be desired. Sporting an overall black theme, the design is rather traditional and we don’t see anything more tempted by designers at Philips. Yes, we can pass it off as a minimal design choice, but something as simple as a silver trim on the chin would have made it slightly better.

Still, that doesn’t mean the TV looks bad sitting in your home. But if you have a vibrant room, it might look different from your decor or will look rather bland to be precise.

While most TVs are usually placed in a dedicated space, they are still expected to sport a sturdy build quality. Although the Philips 8100 series TV is mostly plastic, it still feels sturdy and easy to move around. The TV’s slim profile also makes it easy to move around.

The installation process is also quite simple. You can either put it on the brackets provided in the box or use the wall bracket to hang it on the wall.

Philips gives you a plethora of connectivity options on the TV. There are 4 HDMI ports, all of which support 4K UHD resolution, 2 USB ports, and a TV antenna port. There is also a digital audio out port, a network port, and a headphone jack.

Placed at the rear towards the left side, the position of these ports is also favorable for cable management. I had my decoder and Playstation plugged in simultaneously and found no issues.

Philips bundles a remote control with the TV. Combining both Bluetooth and IR, the remote is bulkier than what we see on other smart TVs. It runs on two triple A batteries that come with the TV.

The 8100 series TV features a 50-inch 4K Ultra HD LED display with a resolution of 3840 x 2160 pixels. The TV has a peak brightness of 400 nits, which is pretty impressive on paper. But how are the performances? Nothing special. But that doesn’t make it bad.

The 4K panel produces vibrant images and color accuracy is top-notch. Colors appear rich, close to source and realistic. The images produced are sharp and the black levels are also satisfactory. The TV also supports HDR10+ and Dolby Vision which kicks in when watching supported content, and yes, that does make a difference.

While I was playing Marvel’s Moon Knight on it, Dolby Vision turned on automatically and improved both the visual and audio experience. I could count the grains in the sand as Mark Spector walked through Egypt.

To further test his skills, I switched to Netlflix and watched Tik Tik Boom. Andrew Garfield’s film is in HDR10+ format, and I thoroughly enjoyed watching it as it was meant to be.

In my experience so far, I haven’t encountered any problems with banding as such. Basically, there was no overlapping of RGB color tones. As is the case with black levels in the TV, light uniformity is also favorable. There were occasional misfires on some shades of red, but nothing that would spoil your experience.

Viewing angles are a tricky business on this one. Although the image quality remains intact when I stand about 30 degrees from the screen, it deteriorates beyond that. To give you a reference – the TV is in my living room and my sofa is not placed exactly opposite it. I had to move my sofa in front of the TV for a better experience. So if it’s a party with multiple people in the room, some of you may have to sit on the floor.

Like most other smart TVs in this range, there are several picture modes on the 8100 series. Namely, there is a standard, vivid, sports, movie, game and power saving mode.

Each of them brings a dedicated preset which is customizable. Specs include backlight, brightness, contrast, saturation, hue, and sharpness. While I made sure to watch content tailored specifically for each mode, I saw myself returning to the Vivid option more often.

Having these options is great, but a user has to go back to the home menu to change the setting, which can be annoying. I wish Philips had added a dedicated button on the controller for this function, like they did for the input modes.

If you are someone who loves console games a lot, then with a refresh rate of 60Hz, the works decently well. However, even with the dedicated game mode picture setting, there were some reflections on the TV that spoiled our experience.

The display has been paired with a dual speaker setup providing a total audio output of 20W. The TV audio quality is quite good and low. With Dolby Atmos support, it’s further enhanced for better audio detail. Where it lags is volume level, audio levels fall short if you have placed the TV in a larger room in my experience.

Running on Android TV 10 out of the box, we’re greeted with a standard UI layout once we turn on the Philips TV. The user interface is easier on the eyes and even if you’re unfamiliar with a smart TV setup, you’ll quickly learn to navigate it.

A certified Google operating system also means access to a full library of Google apps like Google movies and even the Playstore. Yes, the TV is already preloaded with third-party OTT apps such as Netflix and Amazon Prime, but you can download more.

With 4.5 GB of available storage, the TV cannot store multiple apps simultaneously. This is disappointing since competition like the Redmi TV provides 16GB of internal storage.

It also cut short the potential of a Google-backed operating system. Yes, you could say we use a Fire TV Stick so we don’t want internal storage, but then why do you need a smart TV?

Luckily, the apps you ultimately keep on board are well managed. 1.5GB RAM runs apps smoothly and keeps them there longer. Sometimes I would switch between Youtube and Prime after a 2 hour period and the TV would go straight to the timecode I left my movie on.

There are other important Google features on board, such as the Google voice assistant, accessible from the included remote control. So far the TV has not missed any voice commands. Take note as many TVs suffer from voice command accuracy issues, even in the premium segment.

You also get Google Chromecast built-in, so if you need to do some presentations on it, that’s fine. Connectivity is seamless and it works in a jiffy.

The Philips 8100 series smart TVs pack all the desired features you’d expect from a product of this caliber, where it lags behind the price. At ₹48,900 for 50 inches, it is more expensive than its counterparts from Xiaomi and TCL, and also lags behind in terms of specs and features. The panel quality is impressive, but the overall offering falls short of competitors that offer a larger screen with the same feature set.