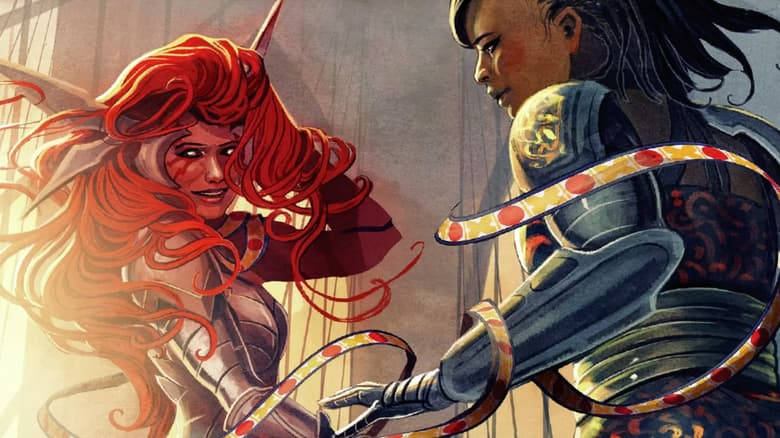 WHO ARE ANGELA AND WILL?

Originally named Aldrif Odinsdottir, Angela is the biological daughter of Odin and Frigga. When Angela was a child, the deal-making angelic warriors of Heven were locked in bitter conflict with Asgard. To stop Odin, the Queen of Angels kidnapped baby Aldrif and apparently killed her. In retaliation, Odin cursed Heven and cut him off from Yggdrasill the Tree of Words, exiling him from the other Nine Realms and erasing him from memory.

Unbeknownst to Asgard, Aldrif survived the Queen of Angels’ attack and was quietly taken in by her servant Loriel, who raised her as Angela in Heven. Although she had no wings, Angela’s Asgardian biology granted her an impressive array of powers, which were further augmented by Angelic armor and training. Upon becoming an adult, Angela became the leader of the hunt, one of Heven’s finest warriors, with weapons like her prehensile ribbons.

During one of her adventures, Angela met Sera, a monk-like anchorite who was confined to one of Heven’s temples to learn how to cast spells. After Sera’s magic helped the warrior stop a monster, Angela repaid her debt to Sera by freeing her and helping her realize her true form. As the two men spent more time together, their relationship became romantic.

However, Sera eventually died during one of her adventures with Angela. Despite Angela’s attempts to resurrect her lover, Sera was sentenced to an isolated prison in Hel, where she befriended Hela’s servant, Leah.