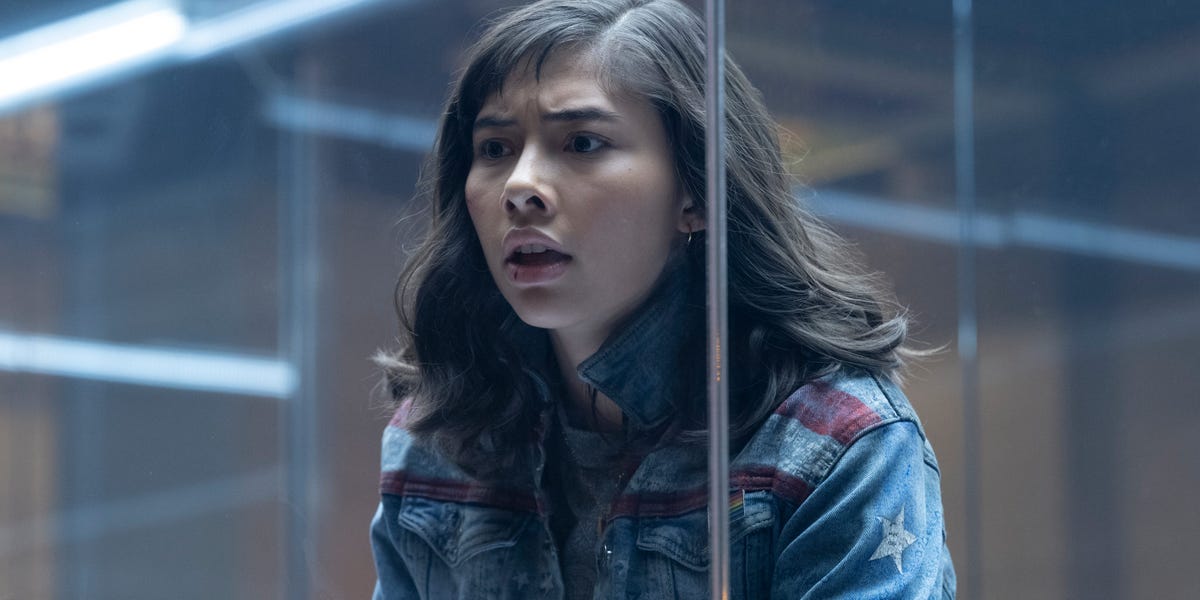 The Marvel Cinematic Universe (MCU) expands with the introduction of a new character, America Chavez, in “Doctor Strange in the Multiverse of Madness,” in theaters Thursday.

16-year-old actress Xochitl Gomez debuts as a multiversal teenage traveler and the first LGBTQ Latina superheroine in the MCU.

Due to her ability to jump between universes, America plays a key role in the film. Here’s what you need to know about the character.

America is a 14-year-old superhero who hasn’t quite mastered her abilities yet.

She comes from an alternate reality and arrives in the main MCU universe as she tries to escape a one-eyed monster named Gargantos.

America can physically move from one universe to another via star-shaped portals that she cannot control as they are triggered by moments of fear.

The first time she opened a portal, America was a child and was frightened by a bee that landed on a flower in her hand. After unwittingly opening a portal, America’s two mothers became lost in the multiverse and she hasn’t seen them since.

As she explains to Benedict Cumberbatch’s Doctor Stephen Strange, dreams offer people windows into their multiversal selves. According to America, who has traveled 73 timelines, no other universe has a variant of her. She knows it because she never dreams.

Wanda wants to steal America’s power so she can find her sons, Billy and Tommy.

In “Multiverse of Madness”, Wanda targets America due to the teenager’s ability to travel across the multiverse.

“Multiverse of Madness” centers on Wanda’s rapid change from an Avenger to a villain in her own right as she becomes corrupted by the Darkhold, a book containing dark magic spells.

Wanda is determined to steal the power of America (which in turn would kill the teenager) because she desperately wants to be reunited with versions of her sons, Billy and Tommy, who exist in another universe. The Boys were first introduced in the 2021 Disney+ series “WandaVision,” but don’t actually exist in the main timeline.

America finally uses her power to help Wanda come to her senses and see the error of her ways. She does this by putting Wanda in an alternate reality, where she horrifies that universe’s versions of herself, Billy and Tommy.

Towards the end of the film, America is seen training with the wizards as Kamar-Taj is being rebuilt. Before Strange and America part ways, she tells him she’s glad she fell into his universe and he says, “Me too, kid. Me too.”

America is a relatively new character in Marvel comics

the latin superhero was first introduced by writer Joe Casey and artist Nick Dragotta in 2011.

In the comics, she is sometimes called Miss America and has been in groups like Teen Brigade, Young Avengers and Ultimates. America’s powers, aside from interdimensional travel, include speed and the ability to fly.

Similar to her live-action counterpart, she has two moms in the comics. In the source material, America is a lesbian who was romantically linked to characters like a superhero named Alloy/Ramone Watts and a paramedic named Lisa Halloran.

In “Multiverse of Madness”, America is also a member of the LGBTQ community. She wears a rainbow flag pin on her denim jacket, but her homosexuality is not explicitly stated.

“It’s important, as we always say, that these movies represent the world as it is and the world outside your window,” Marvel Studios President Kevin Feige said of the portrayal. says de Chaves onscreen during the film’s press conference, which Insider attended.

“That aspect of America’s character comes from the comics,” he said of Chavez’s sexuality. “So we always want to adapt them as well and as honestly as possible. I think when people see the movie, much like in life, it’s not a thing that defines a particular character.”

“It’s great that other people feel represented with her on screen and I think that’s really important,” Gomez said. The Hollywood Reporter at the LA premiere. “She represents LGBTQ [community]Latinas, teens and girls.”